Car stickers and bumper stickers have been around a lot longer than one would think. Car stickers originally came about after World War II, where wire was used to attach flag-like stickers to the bumpers of cars. All credit goes to a man named Forest P. Gill who is believed to have created the first adhesive sticker than could be used on cars rather than wire. This replacement of the wires made car stickers a worldwide phenomenon and they have evolved to become extremely popular.

The bumper sticker/car sticker has evolved to the extent where people use them to express their feelings, where they are from, where they have been, catchy slogans, humorous images and, more commonly, as advertising. The first signs of car sticker advertising was found in America when USA Rock City created a car sticker with the slogan ‘See Rock City’ and stuck them onto cars that were parked in large parking lots to advertise their business. It was a huge success and since then, advertising utilising car stickers has gone from strength to strength. Here at EMC Ad Gifts we were happy to launch our promotional car stickers, and they have likewise been a success when it comes to the world of marketing and advertising.

Car stickers can have a great effect when it comes to advertising your business. Consider the amount of cars that are now on our roads, and how often you are stuck in a traffic jam. Sitting for a long time in traffic causes one’s mind to wander and often size up the other car in front; you will even know their registration plate by the time you get moving! Having a well designed car sticker promoting your business will get more attention than you think, and to top it off it’s simple, effective, and inexpensive. 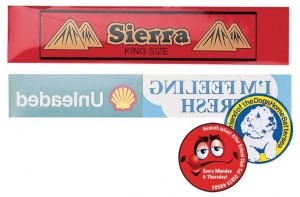 The evolution of car stickers has had a massive effect on some people, so much so that one of the most famous songs of all time in Israel is called ‘Shirat Hasticker’ which translates to ‘The Sticker Song’ that is compiled completely of bumper and car sticker slogans! Imagine that – have a catchy enough slogan, and your sticker will stick, literally, in the minds of those who see it. For more inspiration, check out our other promotional car gifts that you can have your company logo printed onto and have displayed, proudly, in your car.

This entry was posted in Promotional Car Stickers. Bookmark the permalink.