In May 2017 EMC Advertising Gifts was catapulted to new heights with the help of students at King’s Rochester Preparatory School.

Using one of our Teddy Bears, a Go Pro, and a helium balloon, students sent Roffa The Bear nearly 20 miles into the stratosphere as part of a study on space. 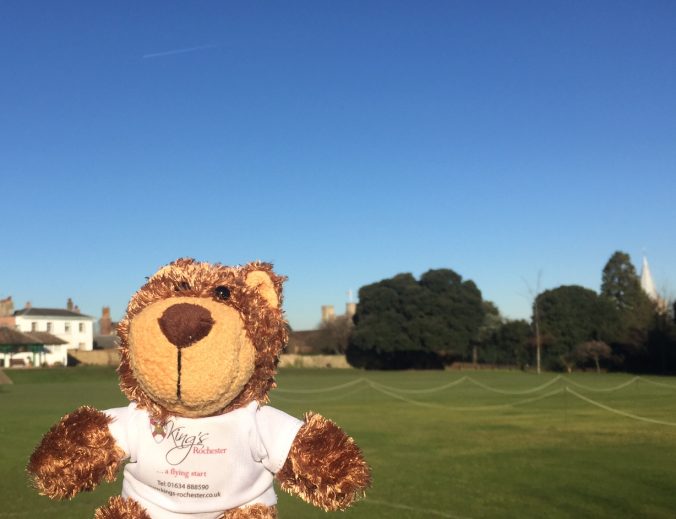 Documented on the school’s purpose-built blog spacemission.kings-rochesterblog.org, the experiment began with several investigative studies conducted by the students.

Looking into various factors such as the effects of cosmic dust, and closely tracking weather predictions, the students were able to experience a wholly cross-curricular project, researching aspects stemming from Science, Mathematics, Design and Technology, Geography, Computing, Digital Media and Production, Marketing and English.

The students even had to contact the Civil Aviation Authority to understand the legalities of the ambitious project to ensure that all aspects were certified and safe. 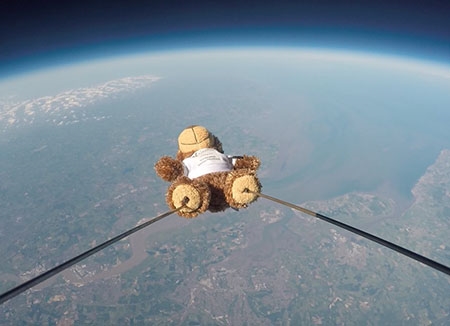 Deciding on what components were needed to ensure a successful result was helped with the expertise of the teachers at the school, and after minor deliberations, Roffa The Bear, who now has his own Twitter, was born.

Kitted out with his specially constructed ‘Payload’, which is the term used for the box that carried Roffa, the Go Pro, and his necessary scientific equipment, the students prepared themselves for the weather-permitting proposed launch-day of May 25th.

After months of strenuous planning, clearance was granted by the Civil Aviation Authority, and Roffa was prepared for liftoff.

Beginning the assembling process, a team of students and their teacher arrived at the launch site – one of the schools playing fields – and began the preparations.

Laying out the helium balloon, safely attaching Roffa, and ensuring that the Payload was securely attached were only a few of the long list of activities the students had to undertake, and by 2:15 pm, the rest of the school had formed a safe distance from the launch, and were ready to watch the highly anticipated lift-off.

Statistics and footage recorded on the Go Pro show that Roffa made almost 100,000 feet in his ascent before the altitude pressure surrounding the balloon forced the component to explode.

Floating back down to earth, Roffa landed in a garden only a mile away from the launch site to the surprise of a local couple, who noticed something ‘peculiar’ falling from the sky.

Reading the notice on the bear’s t-shirt, the couple quickly got in touch with the teachers at King’s Rochester, and Roffa completed his journey after 5 hours travelling.

Watching the amazing footage that the bear captured on his out-of-this-world journey, you can see clearly various sights including the Thames Estuary, the Isle of Wight, and even across the English Channel to France.

The study has provided a creative and interesting learning experience for both the students and teachers alike, and, as a school who prides itself on its ability to create a community that enables individuals to flourish, it is clear to see how the fantastic prep school achieves this.

Feeling inspired? At EMC Advertising Gifts, we pride ourselves on our ability to encourage healthy development – why not take a look at some of the promotional gifts and products we can supply to your company?

Take a look at our range here, or alternatively contact us on 020 8492 2200 to make an enquiry. We can help take your project out of this world!